Dynamic light scattering for proteins and other biologics

Dynamic light scattering (DLS) determines size and size distribution by measuring the rapid changes in laser light intensity being scattered by molecules or particles in solution. DLS is a quick, label-free, and non-destructive way to understand size for many biologics – peptides, proteins, viruses, or VLPs. For getting a read on the average size and aggregation state of a sample of 10 nm antibody, 30 nm AAV or any submicron protein, DLS is the best option for biologics researchers.

Unchained Labs has the ultimate kick-ass instruments for solving DLS problems – Stunner and Uncle. Both use low sample volumes, while each instrument adds a little something extra: want a quick read on concentration and size? Only Stunner can do it. Looking to get the whole picture of a sample’s stability? Uncle is your one-stop platform.

How does dynamic light scattering work?

Shine a laser on a solution of particles and you’ll get plenty of light scattering back out at you. When the laser wavelength is much larger than the particles, you get equal amounts of light scattering in every direction – that’s why we use a 660 nm laser in our DLS systems.

DLS can tell you a lot about the size of the particles in solution by measuring how rapidly that scattered light changes over time (Figure 1). Since small particles zip around quickly, the intensity of light changes quickly. Vice versa for larger ones because they are slower to move around. Analyzing whether light intensity is changing fast or slow – that’s the secret sauce of DLS.

Here’s how to think about analyzing light scattering data for DLS: pick a point in time – now jump forward a microsecond. Odds are good most particles haven’t moved around yet – so the light scattering hasn’t changed and the data from time zero and a microsecond later are about the same. In other words, they have a high correlation.

Now instead of a microsecond, jump forward a full second. Most particles will be in totally different spots – and you now have zero correlation in the data between your starting point and your jump one second later. Graph these correlation values for a range of jumps of different durations and you get a Correlation Function (Figure 2). How quickly particles go from high correlation to zero correlation tells you their average size. This is also why DLS is sometimes called photon correlation spectroscopy (PCS).

To get from a Correlation Function to the stuff you really care about – data – two analysis methods are used. The first method applies a ‘best fit’ to the Correlation Function and the shape of that fit leads to a diffusion coefficient, an average size, and a size distribution. To get from diffusion coefficient to particle diameter the Stokes-Einstein equation comes in handy: 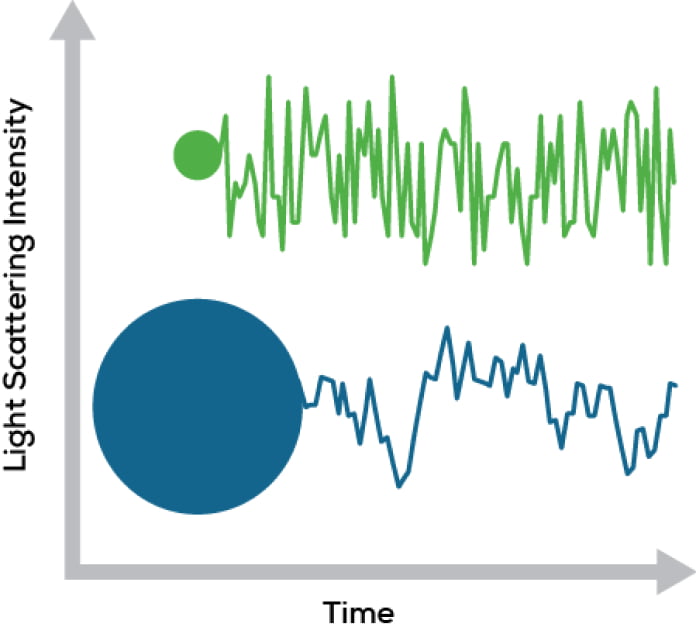 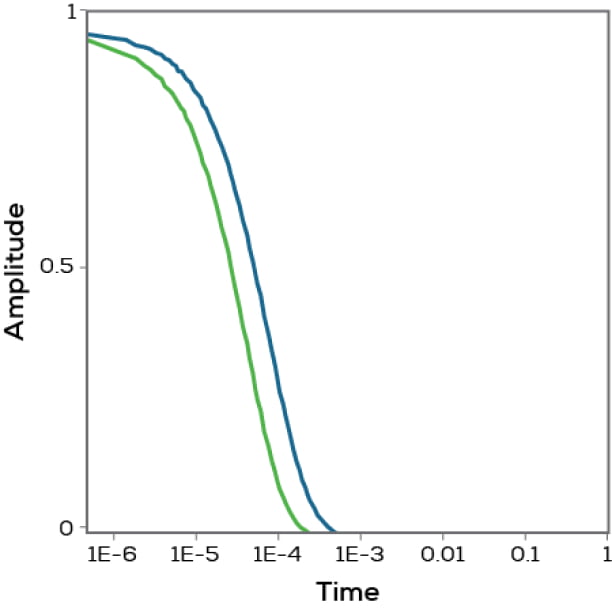 To complete the other variables in this equation, sample temperature is measured and viscosity is user-defined. The diameter calculated is the hydrodynamic diameter. The standard deviation of the diffusion coefficient measurement is connected to the width of the size distribution and usually converted to a polydispersity index (PDI).

The second method of DLS analysis draws upon a library of DLS data to recreate the measured data and determine a sample’s size distributions (Figure 3). Both of these analysis methods follow the latest ISO standards for particle size analysis by DLS as stated within ISO 22412:2017. 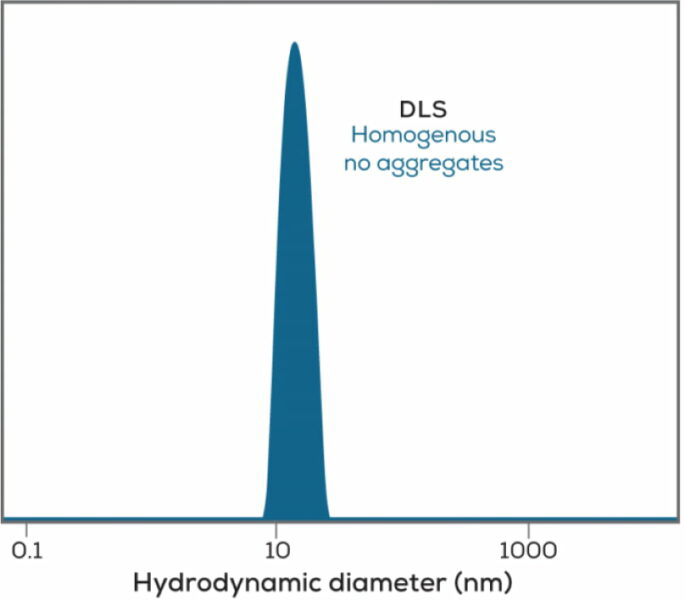 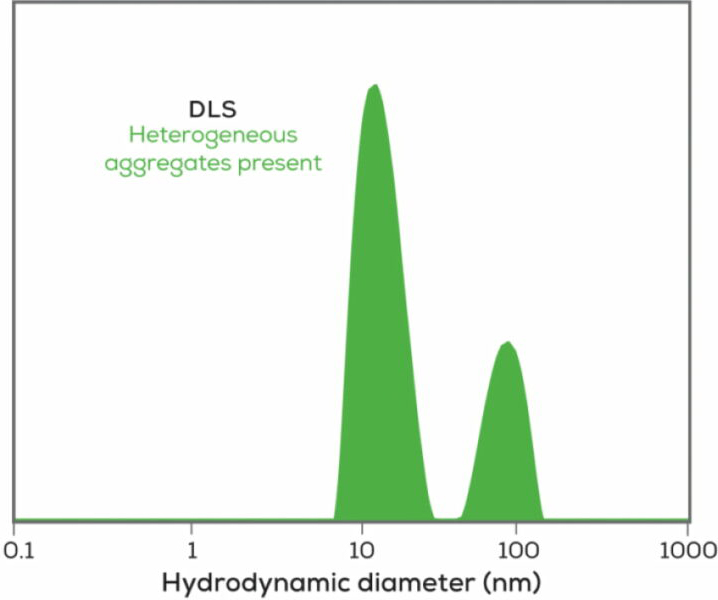 In the world of biologics, DLS will not only tell you the size of your sample, it is also a quick check to determine if your sample is aggregated. Since large particles scatter light intensely, DLS can detect even very rare aggregates in a sample. Sending up a warning flag on protein aggregates can save you from relying on data from a sample already past its prime, or explaining why your antibody is no longer performing at its peak.

Check out our dynamic light scattering instrument line-up below, with 2 solutions designed to solve biologics problems.

Stunner is the only system out there that takes UV/Vis concentration and dynamic light scattering measurements from the same sample in the same run. Pairing up these techniques checks concentration, hydrodynamic size, polydispersity, and detection of aggregates off your to-do list in one shot – using only 2 µL of sample. And concentration measurements are spot-on with accuracy within 2% and precision within 1%.

UV/Vis and DLS also combine to uniquely measure colloidal stability of your samples with kD or B22 data. Instead of making assumptions, Stunner takes an accurate read on concentration for every data point and combines that with DLS data to show how your protein is interacting with itself in solution. 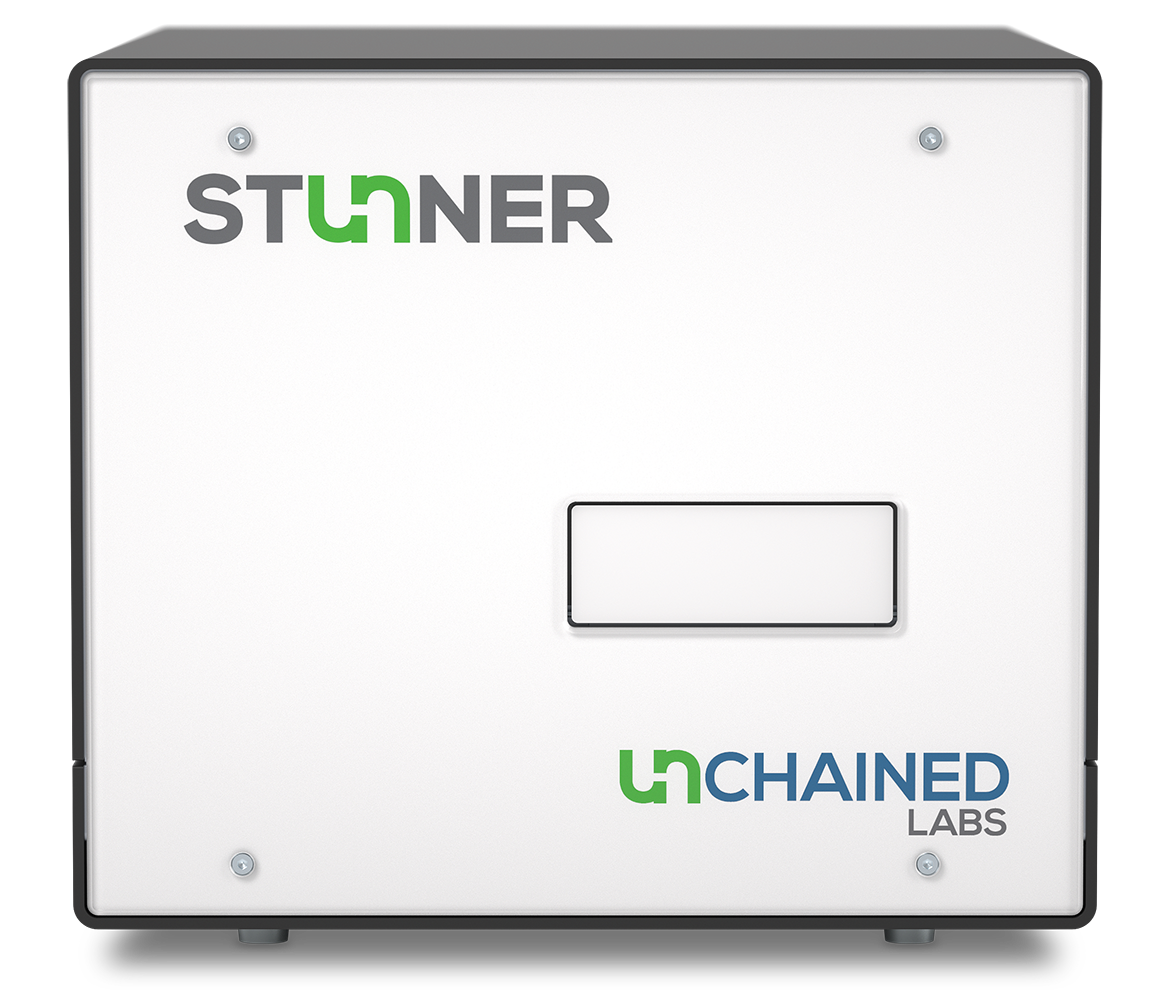 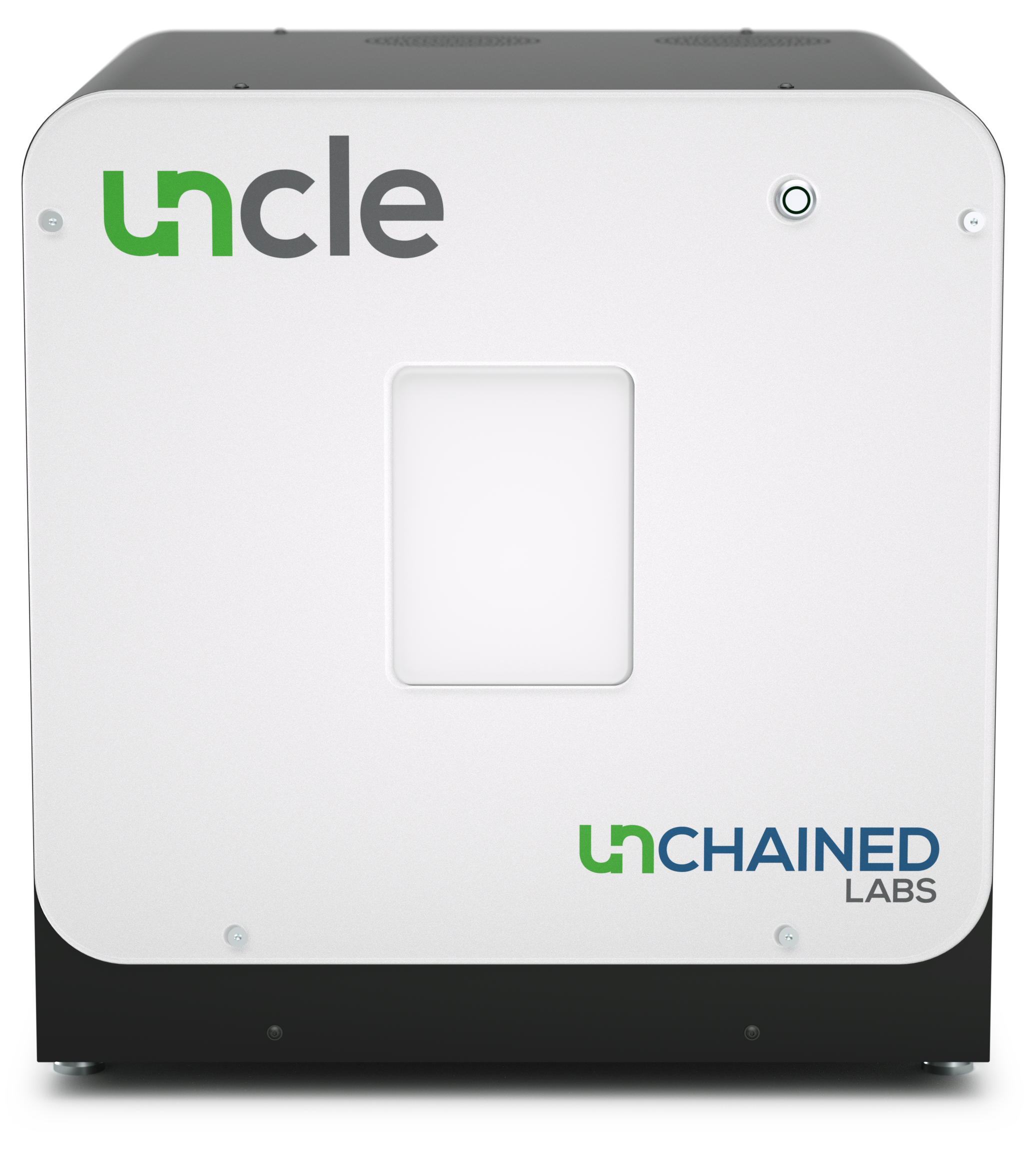 Uncle is the all-in-one biologics stability platform designed to crank out data on stability and formulation in just hours with way less protein. Uncle combines dynamic light scattering, fluorescence and static light scattering with temperature control to deliver 12 powerful applications for characterizing biologics. Only 9 µL of sample gets you size info from DLS, and info on protein unfolding and aggregation from a thermal ramp experiment.

Biologics researchers can now find the right tool built for biologics problems across two dynamic light scattering instruments. Have a question or can’t wait to find out more?